HoverSignal: 9 Apps in One Year 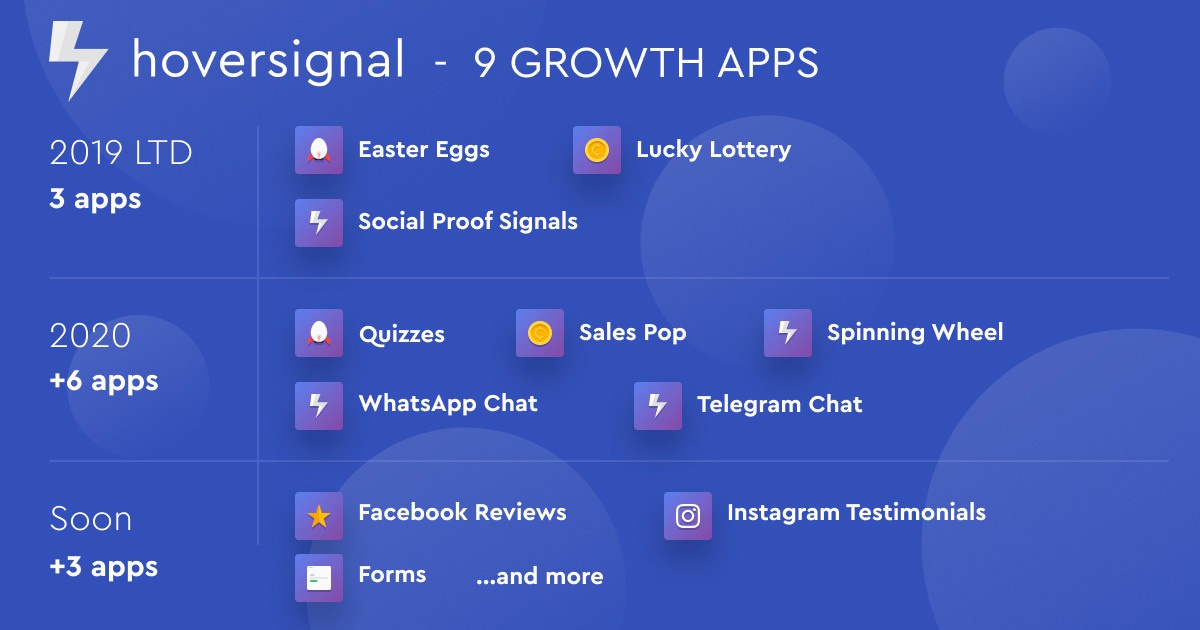 One year ago, in March 2019, we published our Deal at LTDF group on Facebook. We had only 3 apps at the time, and now we've got 9! In this post, we would like to do a little retrospective analysis of what was done during the year and of our plans for the future.

This is what our roadmap looked like during the LTD sale:

We managed to keep nearly all the promises we made:

1. We released the Easter Eggs app, which boosts SEO and user engagement. Example

2. We implemented GIST integration we promised and Moosend integration you asked  in the support.

3. We released the Quiz Maker. Example

This application was in such high demand that we decided to expand its functionality by adding the Landing Page Generator based on the Quizz. Thus you can create custom landing pages on dedicated URLs in minutes without coding. Example

5. As functionality grew, we realized that we needed to make our user interface more friendly. Thus a new admin UI was released.

6. We have also received a lot of questions about widgets customization and decided to create the template base to demonstrate all the functionality. At the moment, we have more than 300 templates for 20 different markets. Example

As we kept nearly all our promises, we decided not to stop and create even more new apps!

During this work, we have also expanded our icons, pop-ups and triggers design collection.

3. We released the Feedback & NPS, a great tool to communicate with your customers. Example

4. More apps coming soon! The Form is in the testing phase. We're going to release it this month.

Our Plans For The Future

We have great plans for 2020. Here's a list of apps we're planning to build:

Vote for our new LTD Deal and get unlimited access to all current and future apps!